In 2019, we undertook a feasibility study for estuarine habitat at the confluence of Doan Brook and Lake Erie. Our partners, including NEORSD, Cleveland Metroparks (Metroparks), and the Port of Cleveland (the Port), contributed expertise and match dollars to the grant that was awarded to the Partnership from the Ohio Department of Natural Resources.

We studied both Gordon Park North and the Cleveland Lakefront Nature Preserve (CLNP), which is owned by the Port, as potential locations for an estuary confluence with Lake Erie. Gordon Park was donated to the City of Cleveland in 1892 with the condition that it would forever remain a free, public park. The Metroparks assumed management the park in 2013 through a lease with Cleveland.

Typical of Lake Erie tributaries, the Doan originally had a wide, open floodplain and marshlands with sweeping bends at its confluence. Gordon Park was highly popular from the turn of the last century through the 1950s, with a pier, beaches and boat liveries. In the decades after World War II, however, the park declined. Water pollution affected Cleveland’s waterfronts and Gordon Park was no exception. Construction of Interstate-90, in the late 1960s, split the park and isolated its shorelands. In 1976, the mouth of Doan Brook was covered by a US Army Corps of Engineers (USACE) dredge disposal facility and the Doan remains locked in this 3,300-foot culvert to this day. After the USACE decommissioned the dredge disposal facility, the peninsula’s eighty-eight acres repopulated with biodiversity, including, 280 species of birds, 42 species of butterflies, mammals, reptiles, and 26 native Ohio plants. This green coastal oasis became the CLNP in 2012. Unfortunately, the contiguous Gordon Park shares none of this biodiversity, as it is comprised of mostly lawn and pavement.

We hired Enviroscience to gather data, evaluate infrastructure and conduct models to better understand how an estuary ecosystem can be restored. Specifically, they were tasked with understanding how a daylighted Doan Brook and restored estuary at Lake Erie would a) manage the high stormwater flows from the entirely urbanized watershed, b) increase fish passage c) provide new habitat for additional communities of flora and fauna, d) improve water quality, e) manage ice and lake fluctuations and f) connect the parks to neighborhoods.

Enviroscience, as well as scientists from NEORSD, determined that it is feasible to create habitat that mimics Doan Brook’s original estuary. This habitat would include a coastal estuary in which lake levels would primarily influence the estuary’s depth and the degree to which wetland vegetation is submerged. The Doan itself would largely remain in its culvert but a new outlet with a gate would allow an access point between the Doan and the estuary. The ability to open and close the gate would allow for direct control over the amount and timing of the Doan’s influence on the estuary.

Lake Erie has lost 95% of its coastal wetlands. Even on a small scale, re-establishing coastal wetlands increases imperative habitat for fish and birds. Estuaries also filter pollutants and protect against storm erosion. If a new estuary were built to compensate for Doan’s habitat loss at Lake Erie, it would be one of the most transformative projects in the watershed. The Metroparks, with site control, can decide whether to seek funding and move forward. 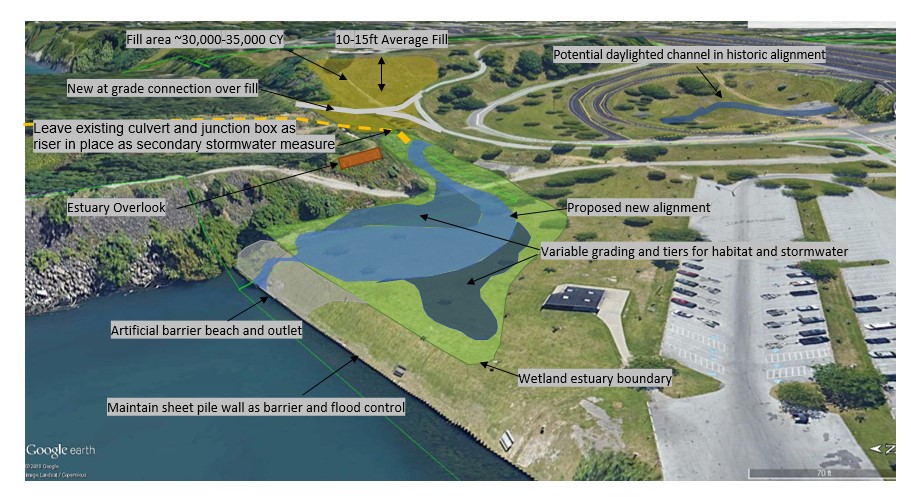